This school year, the ocean has taken up its quarters in the school since March. As part of their Erasmus + project, the P3 FRB students prepared an interview with Thomas Lesage.

Get to know him thanks to their interview!

Thomas Lesage created his association at the age of 16. He is now 18 years old.

Its aim is to protect the oceans and raise awareness among children.

In order for a young person to speak to young people, the “Citizens of the ocean world” project team has invited Thomas Lesage to speak on 7 and 8 June.

Thomas accepted the invitation to come and meet classes from Berkendael and Uccle.

On Tuesday 7 June at 5pm, a conference will be open to all students and their families in Uccle and online.

In March, the P5 FRB students started to think about waste.

In the class council, they decided to organise an event to clean up the school. As a continuation of this civic action, they decided to raise awareness by tagging « Hier begint de zee » / « Ici, commence la mer » in front of the school’s drain covers.

On the occasion of the Brussels Water Days and with the support of the Commune of Forest, stencils and chalk spray cans were lent to the school.

Some of the kindergarten classes took over from the P5 FRB pupils to make other tags.

Congratulations to them for this urban printing action which encourages them not to throw anything away!

The period of war in Ukraine was discussed with the pupils. It was an opportunity to understand the concept of refugees.

Giulia, teacher of the MAT IT class, shared the Italian song Mediterraneamente about the moving story of a child refugee who crosses the Mediterranean to start a new life in Europe.

Christophe, the MAT FRC teacher, adapted the song Mediterraneamente into French. His students learned the French version, together with the MAT FRA class.

Listen to the song mixed by Christophe. The instrumental version is coming soon.😊

In April, the beauty of the ocean  made an appearance through the doors of poetry. 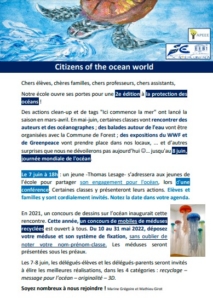 Click on the links to discover artists, musicians, painters and visual artists inspired by the sea and the ocean.
Thanks to these two teachers from the school for sharing 🙂

On 6 May, the primary school student delegates put up the posters announcing the recycled jellyfish mobile competition.

Your turn to create! 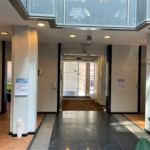 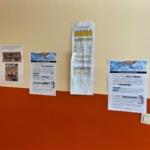 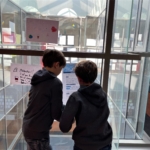 With the help of parents, the recycled jellyfish mobiles were displayed in the school’s courtyards, which were open to families on 7, 8 and 9 June.

On 13 June, the winners were announced.

Here is the video of Tom and Alexandra congratulating all the participants. 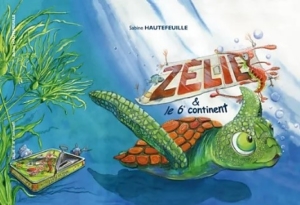 On 31 May, the MAT FRA, MAT FRC and P1 FRB classes met the author of the book “Zélie et le 6e continent”.

With funding from the class funds and the APEEE grant, Sabine Hautefeuille came to spend the day with these 66 pupils to present her work and draw marine animals with them.

Find out about the day’s activities around the ocean and what they discovered.

For those who are curious, you can find the story of the tortoise Zélie in the school library or in the parents’ virtual library (at the end of the page).

On the initiative of school parents involved in the “Citizens of the ocean world” project, a virtual library of stories, documentaries and poems about the seas and oceans will be made available in the different languages of the school!

“Daddy, Mummy, tell me a story about the ocean!” “Not tonight, dear. You have a new story to discover on your school website 😊”

Congratulations to the parents who give meaning to the family-school partnership on educational projects!